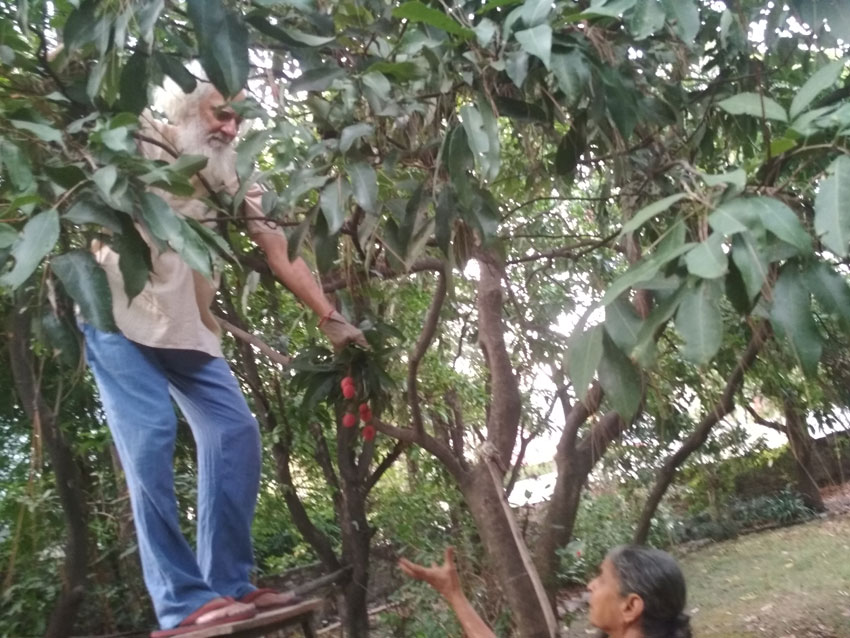 Arvind and Vandana Mehrotra picking litchis in their garden in Dehradun in 2019. Photos by Palash Krishna Mehrotra.

POETRY
1
This lakeside,
this Inner Mongolia,
where the language spoken
is the one you speak
to yourself when you see,
after a rain shower,
a droplet on a leaf tip
or a snail on its way to somewhere.
2
Every few days
walking under trees
I raise an arm to touch a leaf.
You’re slightly
out of reach.
3
By the time we came
it was too late, but this
we knew before we came:
we weren’t untouched
by wind and rain, weren’t quite
the squirrels in the grass
chasing the other’s tail.
The old rain makes the new ground muddy
and we cannot see with this wind in our eyes.
4
A man who looks like a stuffed toy
is sitting at a picnic table. He does not move.
There’s an unlit cigarette in his hand.
Across from him is a four-lane highway and a walking path
on which hollow bricks have been dumped to make a wall.
The government does as it likes. It has nothing to hide.
It’s been a while since I saw a mongoose.
Recently, she wrote to say that she saw one and mistook it for a cat.
It was big. We write to each other every day.
There’s a storm brewing.
The man who looked like a stuffed toy
may not survive
but if I see him again I’ll read his thoughts.
Deaths and memories come in no order.
My thoughts he can read here.
5
“There’s always room at the top,” said my grandfather
when I ran into him in Washington Square Park. He was eating an ice cream.
It was a hot day.
“Scum rises to the top fastest,” said the landlady to a cousin doing
his articles in London in the Sixties.
The cyclist made as if to kick the street dog giving chase, stopping it
in its tracks.
A young man, no shoes, walks about aimlessly, which is the same as purposefully.
A fallen branch blocks the way. I’m forced to step over it.
Love’s a form of verse as much as a sonnet, and so long as there are bushes,
ragpickers will never be short of rags to pick.
6
It was raining when I left.
By the time I reached the sun was out.
Where the sun fell the cobbles were dry.
I walked on the dry patches. A man in a reflective jacket
swept the leaves. Yesterday, I’d passed a piebald cow.
It was dead. It wasn’t there today.
I passed four dogs. When I saw them again, one of them
lifted its leg at the front wheel of my car.
There was no need to tell you any of this.
Of that which there’s no need to tell
is sometimes the most telling.
7
Short black hair, brown with dust;
leather slipons; green flares;
a white shirt that’s turned grey, bright ribbons pinned on it;
tied round her head a piece of cloth,
its ends reaching her waist.
She stood before a tree, tapping a plastic bottle,
listening to the music she made.
8
Behind a tree guard of cast-iron lace,
a five-petalled flower of deep pink
with a black centre;
in a brass inkpot on a chest of drawers,
a pinwheel bought
at a fair.
Between the long toes of buttress roots
I saw it growing, the pinwheel flower
that kept spinning
even when there was no wind.
9
I walked for thirty
minutes today;
no, twenty-eight.
Not that it makes
a difference.
Two minutes.
The plant I thought
was roadside greenery
had two flowers: small,
bluish, with a yellow
throat. I have
sent you the pic on
WhatsApp. See if
you can identify it.
10
A poem like a tree
can be dated precisely.
For instance today
I saw a blue
face mask hanging
on a branch.
11
Two mynas, eyes right,
goose-stepping on flagstones.
They’ll be around when the goose-steppers
are gone like a drying patch
of rain water
on a park bench.

Editor’s note: With reference to the last two lines of poem 6 above, Mehrotra says: ‘The sentence construction that I had at the back of my mind was Wittgenstein’s “Whereof one cannot speak, thereof one must be silent.”’