A Launch Event Across Time Zones

Editor’s note: This launch event for the website you’re looking at took place via Zoom (the new material reality of the pandemic) at 6 pm Indian Standard Time on 11th September 2020.

Participants included the poet and essayist Charles Bernstein; the critic Simon During; the photographer Dayanita Singh; the novelist and essayist Dubravka Ugrešić; and me. We were in conversation with Jon Cook, Professor Emeritus, University of East Anglia.

As you can guess from the names of the participants, the discussion ranged simultaneously (despite a couple of internet-induced glitches) across five time zones: the American East Coast, where Charles Bernstein had not long ago woken up in Brooklyn and worn a bright shirt; Brisbane, where Simon During would probably retire to bed at the end of the event; Amsterdam, where it was afternoon for Dubravka Ugrešić; Norwich, where Jon Cook may have just eaten lunch; and New Delhi and Calcutta, where Dayanita Singh and I were located respectively, two cities in the same time zone,but divergent in other ways.

The paragraph above would ordinarily carry in it globalisation’s note of self-congratulation, which expresses itself as a celebration of cultural multiplicity. Yet there was a difference here which became clearer as the event progressed. It had to do with the participants as well as the audience and the various cultural and disciplinary backgrounds they came from: they seemed to be doing something other than celebrating their variousness. There was an abandoning of the kind of dichotomy that has haunted the globalised world: that, for instance, to discuss or even interrogate literature, you must be from Europe or North America; if you’re not, what you address – even if it’s literature – is a variant of ethnography. I think the underlying assumptions of this approach were abandoned during the event. As a result, it was possible to try – the key word – to be in conversation.

Another event comes to mind, one that has relatively recently become historical because of a revaluation in art history. I’m not making a comparison here; I’m pursuing an analogy to get to what this project and website are about. The event is an exhibition of Bauhaus painters alongside contemporary Bengali artists in Calcutta in 1922. It was conceptualised by Rabindranath Tagore and curated and put together by Stella Kramrisch. The art historian Partha Mitter sees this exhibition as the starting point of modernism in India – a thought that puts other thoughts into motion, such as my feeling that the critical expression of modernism began around thirty years earlier, in Tagore’s 1894 essay on Bengali nursery rhymes. But my interest in the event has to do not with this act of dating the beginnings of an intellectual and artistic chronology, but with what Tagore is up to, conceptually: not bringing ‘East’ and ‘West’ together, but, by shifting locations in all kinds of ways, encouraging a conversation and creating a new frame of reference. This is what the website, like the symposia that led up to it, is attempting, and what the launch event may have inadvertently tried to do: to experiment with shifting already-existing elements, as in a kaleidoscope, so that a new frame of reference is arrived at. 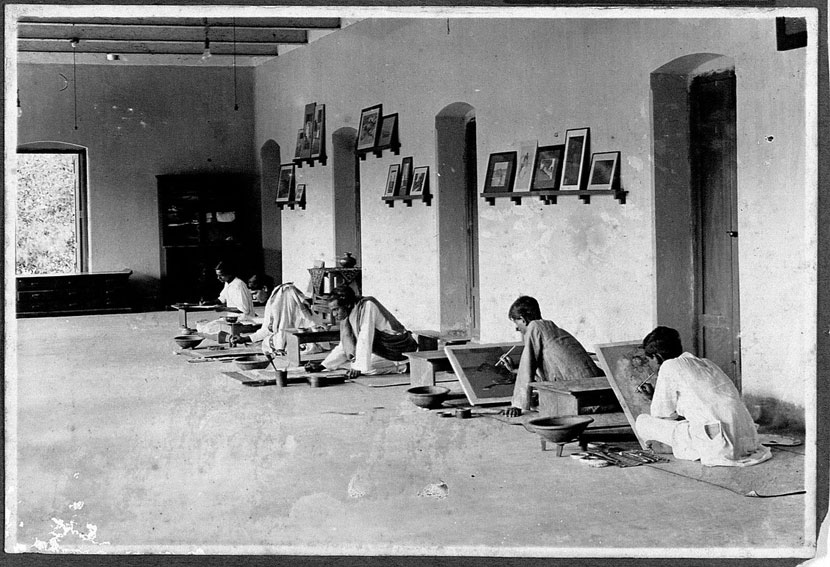 From the Bauhaus Dessau catalogue of the 2013 recreation in Dessau of the 1922 exhibition in Calcutta.